At Sea towards Andaman Islands 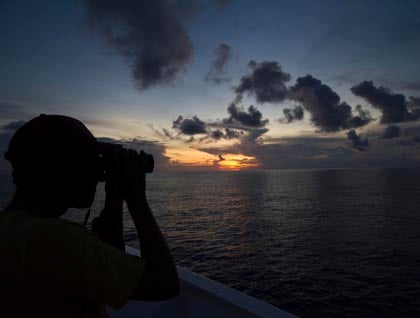 Sunset while crossing the Bengal Bay.

There is nothing like the early mornings when you are in the tropics. Even in the middle of the sea you can feel the day awakening, the air is different, the temperatures are a bit more forgiving and those first hours become the most enjoyable part of the day. This morning was no different. Or maybe it was, we had a lot of activity out there! The early risers enjoyed a group of some 20 common bottlenose dolphins. From quite a distance they made a dash for the bow of the National Geographic Orion and stayed with us for a good time, bow riding and performing amazing acrobatics. And then, they were suddenly gone, just as easily as they had appeared in the first place. Fairly soon we received the visit of another group, this time some long-snout spinner dolphins, the only ones that rotate over themselves as they jump (also a well-known trait of Michael Jordan’s!) giving an even more impressive performance. A few sea birds also made an appearance, but always in very low numbers. It is always surprising to outnumber seabirds by marine mammals, not only in species variety but also in sheer numbers! That has been the case over the last few days.

Our third species of dolphin of the day was the beautifully patterned and colored striped dolphin, which were no less acrobatic than the previous, but also extremely playful and gave ample opportunities for good photos when approaching the bow. During the time in which we had no dolphins or birds, the flying fish made a stellar appearance, three – or, perhaps four – different species of these little known creatures were spotted.

During the afternoon we experienced a few powerful storms and squalls, typical of the beginning of the monsoon, when the conditions are building up for the grandiose amounts of rains that are going to be poured over these latitudes in the next months. Amazing clouds build up fantastic conditions for rainbows and lightning, and later on a very colorful sunset.

An ornithologist, photographer, fisherman, climber, and writer, Santiago Imberti was born and raised in southern Patagonia, Argentina. He obtained a degree in tourism and later in ornithology, which allowed him to combine his love for nature and the outdoors with his work as a birdwatcher, naturalist, fly fishing, and mountain guide. He has been guiding trips in Patagonia, the Antarctic, and Arctic for some 25 years.